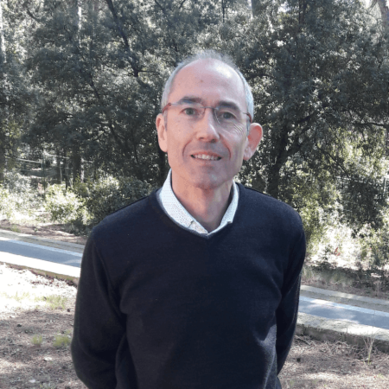 Coding speech sounds in newborns: the potential for frequency monitoring as a biomarker for neurocognitive development

Carles Escera graduated in Psychology in 1987 and joined the UB as assistant professor in 1988 to achieve his PhD in 1993.

Carles Escera is professor of Cognitive  Neuroscience at the Department of Clinical Psychology and Psychobiology, Faculty of Psychology, University of Barcelona, former director of its Institute of Neuroscience (2015-2017) and guarantor researcher of the María de Maeztu Excellence Unit awarded to this institute in 2017.

He is also coordinator of the Generalitat de Catalunya Consolidated Research Group (SGR) in Cognitive Neuroscience.

He has participated in the organization of more than 15 international congresses in Cognitive Neuroscience and Psychophysiology, and has given lectures in universities worldwide (USA, Japan, Singapore, UK, Germany, Canada). He has been the principal investigator of more than 30 research projects, including one from the Consolider-Ingenio 2010 program, and several from the Framework Programs if EU (FP4, FP5, FP7), and  the coordinator of an ERANET.NEURON project from EU and a Marie Slodowska-Curie action of FP7. He is currently involved in an ERC Advanced-Grant in Archaeology  (ARTSOUNDSCAPES) as the leader of two workpackages (psychoacoustics and neuroscience).

He is author of more than 120 papers of high impact, including journals such a Nature Communications, Proceedings of the National Academy of Science, Brain, Cerebral Cortex o Journal of Neuroscience. Dr. Escera has received the ICREA Acadèmia award in the 2010 and 2015 calls.

His research interests are addressed towards the understanding the mysteries of the mind by deciphering the mechanisms of brain function, including those of attention, auditory perception, musical processing, and emotion, and how these mechanisms are disrupted in neurodevelopment and mental disorders such as autism, dyslexia, attention deficit disorder or schizophrenia. The approach of his research group is based on the recording of the human electroencephalogram (EEG) to analyze event-related brain potentials and oscillatory activity. This approach is complemented with magnetoencephalography (MEG), functional magnetic resonance (fMRI) and genetic analysis. At present, the Escera's research is driven by the idea that even deep structures within the brain, such as the auditory midbrain, play a critical role in auditory cognition, contributing to speech, music and rhythm perception.