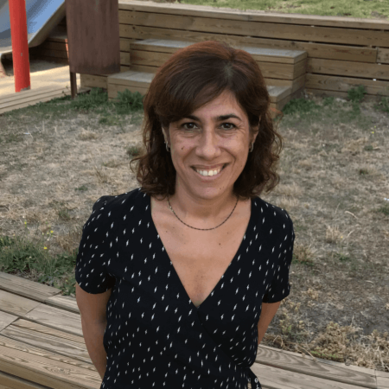 She is the Coordinator of the Maternal-Fetal Medicine Section of the Catalan Society of Obstetrics and Gynecology (SCOG) (2018-current).

She is an associate professor of the subject of obstetrics and gynaecology at the Faculty of Medicine, University of Barcelona (UB) (2014-current), as well as Coordinator of the item (2018-current).

She has been an associate professor in the midwifery speciality, UB (2011-2012) and is a current professor at the Institute for Health Studies. Health Department. Government of Catalonia (IES) in this speciality (2013-current).

Currently, she is part of the Scientific and Teaching Committee of an International Master in Maternal-Fetal Medicine at the UB (2018-current).

The researcher has directed doctoral theses and several final masters and residency projects. She has also led an international thesis of the Erasmus Mundus Joint Doctorate Program in Fetal Medicine (FetalMed-PhD) and has a current one registered.

In research, the researcher is responsible for the line 'Effects of environment where fetal growth' at Fetal I + D, Fetal Medicine Foundation, Barcelona. She is the leading researcher (IP) of the Environment and complications in pregnancy group at the Institut de Recerca Sant Joan de Déu. His research career focuses on the fetal environment-environment, placental pathology and fetal growth restriction. Public funds finance this line in projects where Dr Is the IP: funds from the Carlos III Health Institute (ISCIII) (PI11 / 02590, PI04 / 1637, EC10-147), grants from the Fundació Sant Joan de Déu (BR201402), and International projects (HEI- HealthEffects Institute (RFA 17-1) and ERC advanced grant (AIR-NB). Dr Gómez is the IP of the group of Hospital San Juan de Dios Barcelona to the Maternal and Child Health Network and development (SAMID Network) financed by ISCIII (RD08 / 0072) as Thematic Networks for Cooperative Research (RETICS) (RD16 / 0022/0014: 2017 to 2021).