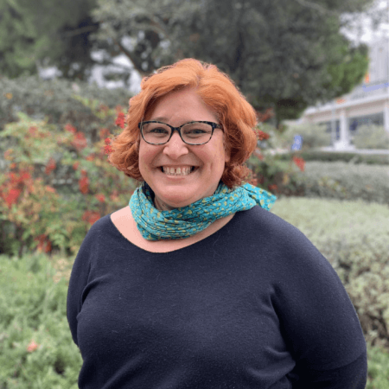 Genomics for the diagnosis of rare diseases

Judith Armstrong graduated in Biology in 1997 from the University of Barcelona. His training has been entirely in the field of Neurogenetics and hereditary neurological diseases, begun in studies of fragile X chromosome syndrome, work carried out during the past year by the John F. Kennedy Instituttet Laboratory, Denmark under the direction of the Dr. Grønskov. This stay involved obtaining the degree of Experimental Master in Human Genetics in 1998. She completed his training with a doctorate on Rett syndrome at the SJD Barcelona Children's Hospital, ​​under the direction of Dr. Monrós in 2003.

Between 2003 and 2007, and during his postdoctoral stay at the Bellvitge Hospital, she developed the Neurological Tissue DNA Bank of the ICS Institute of Neuropathology, under the direction of Dr. Ferrer and Dr. Volpini.

Currently and since 2008 she is a faculty assistant of the Genetic and Molecular Medicine Service of the SJD Barcelona Children's Hospital and belongs to the CIBERER U-703 group, in charge of research and molecular diagnosis of Rett Syndrome. Together with Dr. Pineda and starting in 2008, the research projects in Rett syndrome were restarted: 2008, "Phenotype-genotype correlation studies in Rett syndrome. Study of deletions of the MECP2 gene AND OTHER genes"; in 2011 "Genetic diagnosis of Rett syndrome: First step for pharmacological therapy. Study in the genes involved and phenotype-genotype correlation" (PFNR0004), in 2013 "Exome sequencing for discovery of candidate genes in Rett and Rett variants" (PFNR0037), in 2015 "Duplication of MECP2: genetic and clinical study in Spanish patients" (PCP00148), 2016 "Clinical and molecular characterization of Rett syndrome: elucidating unsolved cases" (FIS15 / 01159) and in 2017 "Function of the MeCP2 protein: implications in MECP2 Duplication syndrome and Rett syndrome ". Along with Dr. Pineda, and in relation to Rett syndrome, more than 30 publications with an impact factor have been published.

The Rett Syndrome group at the SJD Barcelona Children's Hospital is a national reference center, both at the clinical and molecular level, registering more than 500 cases of Rett Syndrome patients with confirmed clinical and genetic diagnosis. Since it was discovered that mutations in the MECP2 gene caused Rett syndrome (October 1999), our laboratory has diagnosed samples from all over the country and abroad (Chile, Argentina, Uruguay, the Czech Republic, Turkey, Israel, etc.). Currently, molecular diagnosis of all genes that are capable of causing Rett (MECP2, CDKL5, and FoxG1) and Rett-like is performed using a wide variety of diagnostic techniques (NGS, direct sequencing, MLPA, PCRq, etc.).

In 2017, Dr. Pineda and Dr. Armstrong received the 1st AELMHU Award for the best clinical career in Rare Diseases.

She currently leads the Rett syndrome research group where she studies the mechanisms involved in gene regulation of the MeCP2 functional pathway and how to apply this knowledge in personalized therapies in patients with genetic diseases.