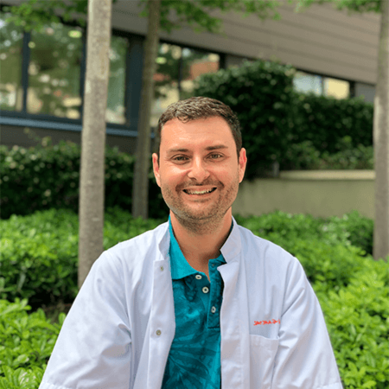 Sergi César graduated in Medicine in 2006 from the University Rovira i Virgili. He specialized in Paediatrics in Tarragona and completed his training with a Master's Degree in Paediatric Cardiology at the University of Barcelona-SJD Barcelona Children’s Hospital between 2011 and 2013. With special interest in arrhythmias, family heart disease and neuromuscular diseases, to complete The studies completed the postgraduate course in medical genetics at the University of Valencia in 2016 and began doctoral studies in 2017 in the line of neuromuscular diseases with cardiac involvement. Along these lines, in 2016, it developed a research project on cardiac image analysis in Pennsylvania, USA, and a project on laminopathy at the National Center for Scientific Research in collaboration with the Carlos III Institute in Madrid.

Since 2013, he works in the paediatric cardiology service of the SJD Barcelona Children's Hospital and coordinates cardiological research at the Clinical Trials Unit, in addition to carrying out research tasks in the line of investigation of arrhythmias, family heart disease and sudden death.

Since 2014, he also directs and coordinates cardiac ultrasound courses at the Paediatric Classroom of the SJD Barcelona Children's Hospital.