A team of researchers at the Institut de Recerca Sant Joan de Déu have successfully reproduced a pediatric tumour in its different developmental stages, early (at the time of diagnosis) and advanced (when the disease reappears), in laboratory mice, with the aim of analysing how resistance to medication develops.

It involves Ewing's sarcoma, a tumour that is diagnosed in 50 children and adolescents every year in Spain. This type of tumour usually responds well to chemotherapy, but a high percentage of patients relapse after some time and late-stage tumours have proven to be more resistant to treatment.

After years of research in order to establish pairs of avatar tumours in various patients in the two phases of this disease, the researchers have used a technique called microdialysis to collect samples from within tumours and analyse in situ whether drugs are able to penetrate the cancer cell.

This type of study using paired samples, which has been carried out for the first time worldwide, has led to the discovery that in the early stages of the disease the drug is able to enter the inside of cancerous cells and destroy them, while in the relapse stage of these tumours, they generate protection in the form of P-glycoprotein (related to drug resistance), which makes the cell impermeable. Researchers have observed that this protein becomes up to 10,000 times more abundant in some of these relapsed tumours as compared to early tumours. The results of this study have been published in one of the most important specialist periodicals in pharmacology, the Journal of Controlled Release.

Clinical application of the study

The research leader, Ángel Montero Carcaboso, points out that these studies may give rise to their clinical application in the future

"We've found that the majority of these relapsed tumours are very similar genetically to early tumours, but they are somewhat insulated from chemotherapy, because they arm themselves with pumps to "bail" the drug out the tumour cells. For this reason, we have to apply new treatments that improve the penetration of the drugs in these tumours", she states.

One of the main difficulties that the researchers found was how to generate avatar tumours in patients.

"This study has taken us years because only one in every three tumours has been successfully grafted onto mice. The achievement of paired models in the same patient is a great success, after having never been represented before in pediatric cancer, and it may be very useful in the future for understanding how each patient evolves with treatment, and to enable the selection of tailor-made treatments", explains Helena Castillo Écija, the study's first author.

The researchers are currently studying which tumour properties favour the selective penetration of drugs in order to develop more active, safer treatments. 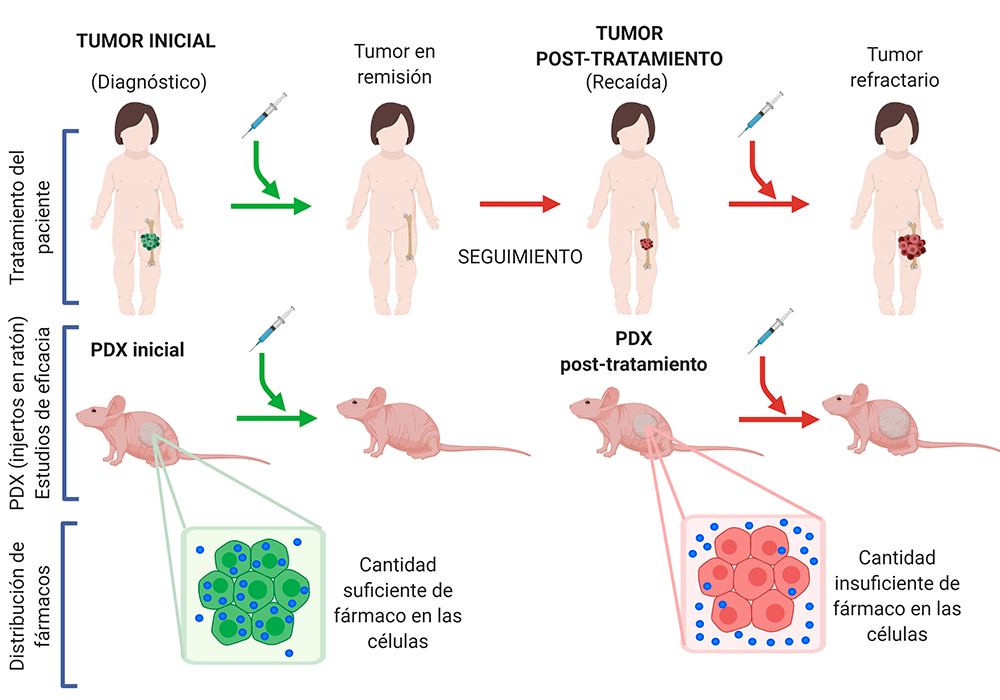 This is the first time in the world that pairs of "avatar tumours" have been achieved in the early and advanced stages of tumour from the same child.