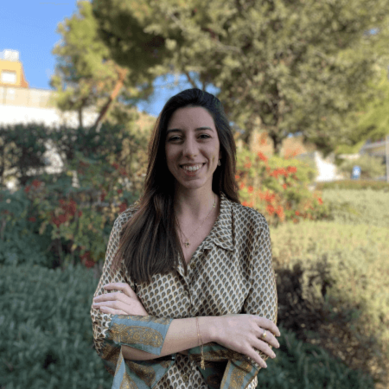 Since 2018, she has been a research assistant in the Research in Child and Adolescent Mental Health at the Institut de Recerca Sant Joan de Déu. She has collaborated in several publicly funded projects within the line of research focused on the study of patients at risk of developing a psychotic disorder.

She is currently collaborating in the coordination of the "Longitudinal Multicenter Study on Predictive Markers for the Transition to Psychosis in Children and Adolescents at Risk of Psychosis: The Role of Intrauterine Stress (CAPRIS-EI)" (PI21 / 00090); and in the study "Cognitive reserve in children and adolescents with psychosis risk syndrome: the CORE-CAPRIS study" (INTRAMURAL2021).

She is also the study coordinator for the European clinical trial "Placebo-controlled trial in subjects at Ultra-high Risk for Psychosis with Omega-3 fatty acids in Europe (PURPOSE)" (University Medical Center Utrecht).