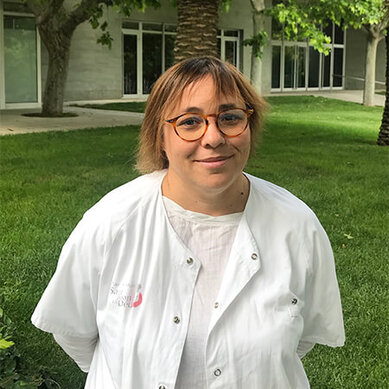 The researcher Luisa Baladón graduated in Medicine from the University of Barcelona in 1999 and obtained a specialty in Psychiatry in 2004 at the Nostra Sra de Sonsoles Hospital in Ávila. She has a Master's degree in Psychogeriatrics since 2007. She is currently developing his doctoral thesis.

She currently works as an assistant in the Mental Health Directorate at the Parc Sanitari Sant Joan de Déu.

After working in the Acute Unit of Sagrat Cor de Martorell, in 2005 she moved to CSMA de Garraf. She started as an assistant psychiatrist in the Acute Unit where she remained until 2015, when she became the coordinator of the Garraf Mental Health Center.

As a researcher, she participated in the analysis of the DASMAP project where she analyzed the data related to the epidemiology of mental illnesses in elderly people as well as their quality of life.