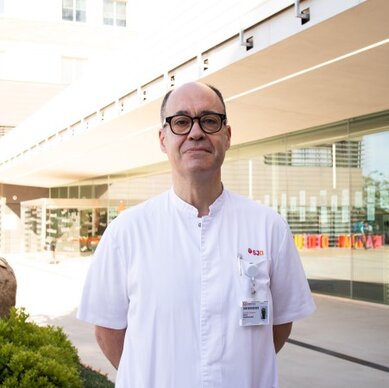 The researcher David Moreno graduated in Medicine in 1993 from the Universitat de Barcelona and completed his specialization in Orthopedic Surgery and Traumatology at the Hospital Mutua de Terrassa in 2000. Since 2006 he has worked at the SJD Barcelona Children’s Hospital, ​​​​within the Knee Pathology and Arthroscopic Treatment Unit.

He participates as a teaching collaborator in the subjects "The Growing Locomotor System" and "Arthroscopic Surgery" at the Universitat de Barcelona. And also, in the Master of Rheumatology that is taught at the SJD Barcelona Children's Hospital.

He has completed the Research Sufficiency course within the Doctorate program of the Department of Surgery and Surgical Specialties. His doctoral project will focus on repairs of anterior cruciate ligament injuries in pediatric patients and the factors that determine their high morbidity rate.

During these years he has broadened the indications of arthroscopic treatment such as in the control of fracture reduction, resection of intra-articular tumors, and coadjuvant treatment in rheumatic diseases. And he introduced the meniscal transplant technique at the SJD Barcelona Children's Hospital.