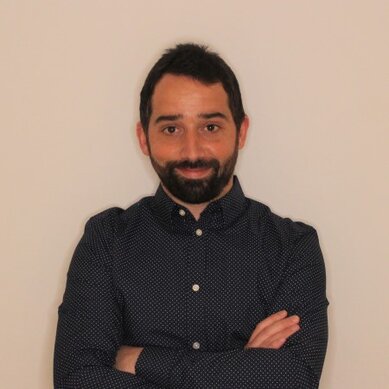 Cédric Labay obtained a Master in Nanoscience and Nanotechnology in 2009 from the University of Barcelona and his PhD in Textile Engineering from the Polytechnic University of Catalonia (UPC) in 2014, with the doctoral thesis "Treatment of Textile Surfaces by Plasma Technology for Biomedical Applications ", based on the surface modification of synthetic fibers and drug/fiber interactions through low-temperature plasma treatments applied to the fibers, in order to allow the modulation of the charge and the release of the active principles (pharmaceuticals and cosmetics) from textile drug delivery systems that do not require the use of any additional chemicals.

Between 2016 and 2017 he held a first position as a postdoctoral researcher in the research group on "Biomimetic, Biocarriers and Bioimplants (The 3Bs)", at the "Department of Micro-and Nanotechnology (DTU Nanotech)" of the "Technical University of Denmark "(DTU, Denmark) for 17 months, where he researched in colloidal systems, polymer capsules, capsosomes for combinatorial therapy and microreactors for conducting enzymatic/biological reactions.

Since 2017 he is a postdoctoral researcher for the project "Atmospheric PressureplAsma meets biomaterials for bone Cancer Healing-APACHE", led by Dr. Cristina Canal, within the research line of Plasmas for Biomedical Applications. His research work focuses on the atmospheric plasma treatment of hydrogels to trap reactive oxygen and nitrogen species (RONS) in soft biomaterials to design RONS delivery systems targeted at local bone cancer therapy.

Between 2018 and 2019, he taught Biomaterials at Pompeu Fabra University for second-year Biomedical Engineering students.